How To Light A Small Commercial

Summary: Ryan takes you behind the scenes of a small budget commercial shoot, where he breaks down one of the scenes, explaining his process and lighting set-ups.

Small commercial projects can be a fun challenge to light and shoot. Typically you’ll have a larger crew and you’ll have more lights, which can be a lot of fun, but you’ll still be constrained by a smaller budget and a tight schedule. So in this video I’m going to take you behind the scenes on a video shoot we did for a local yoga studio. First let’s take a look at the highlight reel and then we’ll break it down shot by shot.

[A two-scene highlight reel is played.] 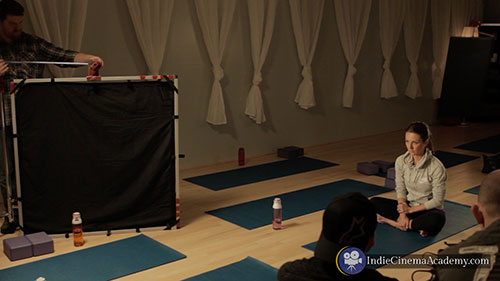 The fictitious backstory for the storyline involves the lead character coming to this yoga studio to escape from her hectic, isolating life. She is there to refocus and regroup, with support from her friends. It’s all about her journey and her experience at the yoga studio. 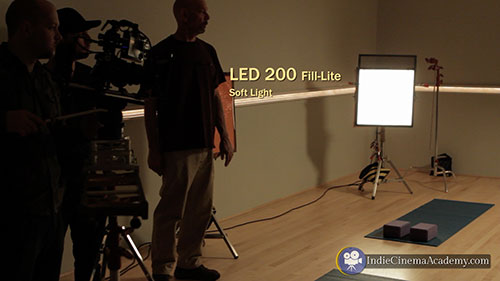 When it came to lighting this video, we wanted to evoke a feeling of warmth and calmness. We also wanted to play off of the idea of yin and yang, or opposites, by having areas of shadow and light. To get that look, I opted to go with soft lighting throughout the various scenes. Our lights of choice were Fill-Lite lights because they are soft and versatile. The only problem was that ours are daylight balanced. They have the light quality I wanted, they were just the wrong color temperature. 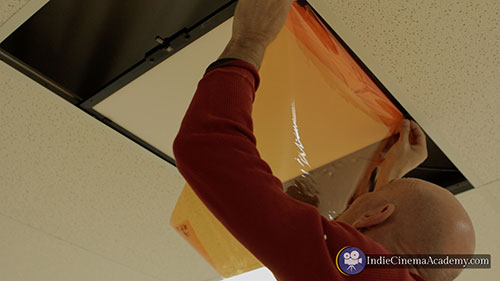 This wouldn’t have been a big deal if the rest of the practical lights were daylight balanced too, but they weren’t. We considered switching the practical bulbs out for daylight bulbs, but ran into a problem. The rope light which ran along the wall in one scene was tungsten balanced. The backup daylight balanced LED rope light couldn’t be used since it had an odd flicker and looked very blue. This pushed us to go tungsten with everything, so we gelled all of the lights to match. 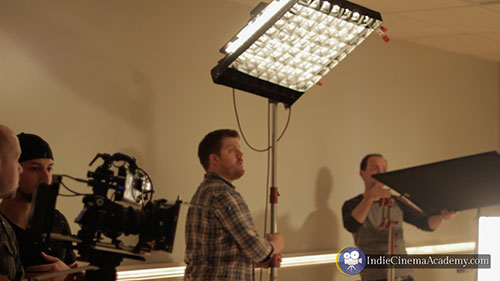 Now that we had our look figured out and the practical lights issue tackled, we moved on to actually lighting our set. I’ll cover these shots in the order that we filmed them so you can see how the lighting changes as we move throughout this first setup in the commercial. 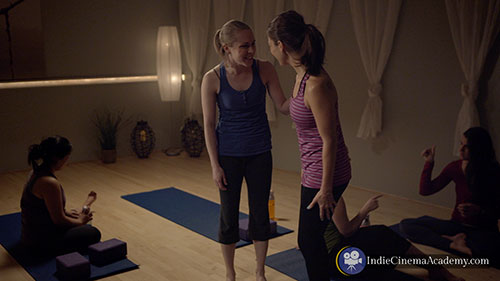 The wide is always where you have to compromise the most with lighting. The amount of space you have to light and the action that happens means that you’re not going to be able to place every light in the exact, ideal position you want. So try to get it about 80% of the way there. Don’t waste a lot of time trying to get everything perfect; save time for the other shots. 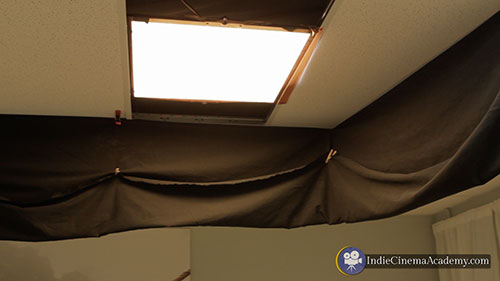 In this wide shot, we start with two people talking on the mats, we cut to our lead entering the frame, and then one of the friends gets up to talk with her. For this setup I used three lights. I placed one square…

Where To Begin Lighting Your Set (Cinematic Lighting Lesson 18)