Three Lighting Tips For Your Next Action Film

Filming an action film is a daunting task even under the best of circumstances. More overwhelming is when you only have three in your lighting crew and you’re cramming two days worth of set-ups into one day. That was what we had to pull off for the short film, “Easy Day” (2013) (video embedded below). In this post, I’m going to share how we did it, and then give you three lighting tips that will make your next action film look amazing.

Action films often involve locations with a lot of space. (Without space, it is difficult to create ballistic movement and nerve racking suspense.) So an action film with a limited budget, a small crew, and a tight schedule is very difficult to light because all that space needs to be lit. For this project the warehouse location measured 10,000 square feet. Lighting such a vast area normally means bringing in large lights – think 18k HMIs. But big lights also mean a large crew to manhandle them as well as a pre-light day to rig them. For this project, that was clearly not going to happen…

Since I couldn’t place artificial lights where I wanted the sun to be, I was forced to embrace what was there and plan accordingly. The first step of preproduction was scouting the location to see what it provided me, and observe how the sun moved and lit the space. This required my go-to sun app: SunSeeker. 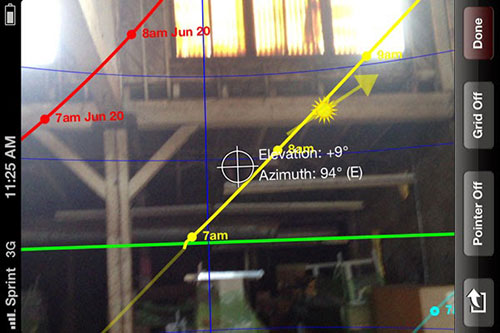 Fortunately for me, this warehouse stretched north/south, meaning the side windows faced east/west. These large windows meant the sun would pour in during the morning and afternoon, doing most of the heavy lifting of lighting the location. This left me only to point the camera in the correct direction for that time of day. The only time the location would not look great would be that small window of time around midday.

So the director Shawn Nelson and I came up with the following plan:

We shoot looking east in the morning to take advantage of the sun, which would be our key light. (This lighting was very “side-y,” perfect for the look we were after.)

At midday, we would turn south then schedule our lunch break to let the sun continue westward. (Only a couple shots looked good during the midday sun, since the sun only backlit some of the windows.)

Looking West, Later In The Day

In the afternoon we faced west to again take advantage of the sunlight flowing through the windows.

While the sun did a lot of the work lighting the warehouse, we couldn’t just show up and shoot. To create the exact look we wanted, we still needed to supplement the light, add some accents, and then remove some light from certain areas.

This is where the real art of lighting comes in: knowing where to place accents and where to remove them; it is something I’m still working to master. For this particular film, I wanted to highlight the immense warehouse space. I focused on placing lights in the scene that showed off the depth of the location without drawing attention to itself.

Having a small lighting package actually actually helped with this. Around 95% of the accent lights in the background are from the five 4′ MacTech LED tubes in our kit. Their decent CRI, daylight color temperature, high light output, and low power draw made them the perfect light to use. (Especially since we only had three 20 amp circuits to work with.)

These background accents helped me add extra depth and texture to each shot. Without these lights, the background would have fallen off into black making the space feel smaller. If we had done this we may as well have been shooting in someone’s garage, since that is what it would have felt like.

I would love to say it was my lighting design gave this film its amazing look, the truth is it wouldn’t have looked nearly as good if the location and props had not been carefully selected.

This is often where I see most indie films and small productions failing. Many times they don’t spend the time finding and dressing a location so that it fits the story. Even if I had a 20 person lighting crew, three days of pre-lighting, and a $15,000 lighting budget, if the location was a 20 foot by 20 foot white walled room and the props were plastic toy guns, it still would have looked like crap. And using the wrong location would have made my job MUCH TOUGHER! Instead of accenting the location and embracing the texture, I would have had to hide and minimize everything as much as possible.

Location & Props Make All The Difference

The texture of this location was amazing: the walls and floor were covered in paint, dirt, broken glass, and dust. Everything was naturally weathered and worn. We hung some Visqueen in the doorways, aging it with spray paint and dirty water to give it more texture. We had a briefcase of “coke,” and all of the guns were real (though outfitted with the proper blanks, and handled by trained professionals, of course). These little details added together create the magic that ended up on screen. The lighting just highlighted them so they could shine.

Embrace What You Have

By finding the proper location, outfitting it with the right props and set dressing, then scheduling the day to take advantage of the light, we were able to maximize one day of shooting to get everything we needed for this film. While an additional day to shoot would have been even better, especially when we were pinched for time for the exterior car sequence, in the end it was about embracing what we had to work with and maximizing everything to the fullest.

Bonus Tip: Know When To Cut Your Losses

The biggest time sucks on this project were the blood squibs. They ate up a lot more time than we had scheduled. Those delays made me concerned about fitting in the exterior car scene, as we were shooting it only with available light, and it was the last thing to shoot on our schedule.

So, after we got what we needed for the interior fight scene, Shawn and I talked and agreed to skip the groin squib shot, coming back to it only after we shot everything else. While the groin shot was “cool,” the exterior car scene was much more important since it introduced the film.

Since this last squib shot was a close up, I knew I could come back after sunset and light it artificially to match everything else. When we returned to a completely dark warehouse to shoot our last shot of the day, it was an easy task to light and shoot this last scene.

Using a source four as the “sun light,” I had it positioned to rake across his leg like the sun had done earlier that day. Then I took a couple of MacTech tubes, bounced them into a 4′ x 6′ white Sun Bounce, which I raked across the background. And, viola! An insert shot that cuts perfectly with what we shot earlier that day.

(SIDE NOTE: This is where having a light meter and a good memory come in handy. I remembered what the scene felt like, and my meter allowed me to dial in the proper light levels to match what we already shot.)

[For those of you who remember the tutorial I did on building a wireless transmitter for $275, this is the project that we used it on- and it worked great. 🙂 ]

What tips do you have for shooting and lighting an action film on a tight budget and with a small crew? 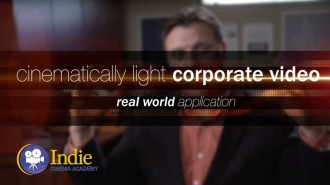 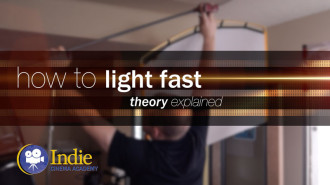 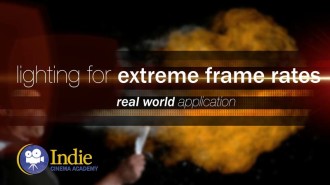 Can You Trust Your Color Meter? [VIDEO]

Why Use A Light Meter In The Digital Video Age?
Scroll to top