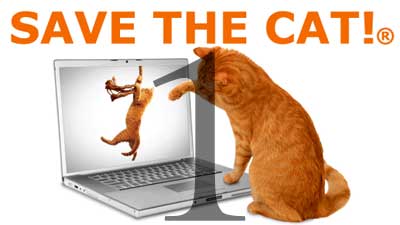 “Save The Cat!” Screenwriting Book: Chapter One Summary

Instead of writing a review of “Save The Cat! The Last Book on Screenwriting You’ll Ever Need”

by Blake Snyder –something that many, MANY other readers have done– I instead decided it would be much more beneficial to create “Cliffs Notes” of the book. This will accomplish two things: it will give screenwriters who haven’t read this book an idea of the gems within, and it will create a handy summary/reminder for those who have read it and are referring back.

There are eight chapters, so I’m breaking these “Cliffs Notes” into eight posts.

(Mini-review, for those who demand it: Very useful primer for beginner screenwriters, and a good resource for veteren writers. Worth the read, but definitely not the “last book on screenwriting you’ll ever need.” The principles in the book could have saved many current Hollywood releases, although some of the great movies out there don’t adhere 100% to Snyder’s formula.)

Enjoy the book! And leave a comment below to let us know your take on Snyder’s advice!

Some movies are easy to figure out. This might be because they are “pre-sold franchises,” which are movies like “Superman,” “Shrek,” “Ocean’s Eleven” that most people know the general plot and characters. This largely explains why Hollywood makes so many sequels and perpetually remakes classics: there is already a fan-base so selling it to the public is a lot easier. Other movies are easy to figure out since they have a great logline or one-line—a one or two sentence description of the movie—that shows the movie is full of potential based on the premise, the characters, and the conflict.

The most important thing for a good logline is irony. It is the irony that creates the “hook,” the intrigue that grabs your interest and makes you want to find out more.

The next most important characteristic in a great logline is that it captures the whole movie, either its essence or its potential.

An important element in a great logline is the sense of what demographic the movie is aimed at. This helps in selling the movie because the studio buyers will know which of the “four-quadrants” it is aimed at: men over 25, men under 25, women over 25, or women under 25. Many movies are aimed at all four by having elements (such are actors/actresses in the their mid-20s) that all four quadrants are attracted to.

Along with audience, a good logline gives the impression of how much it will cost to make it. If it is loaded with science fiction or fantasy, a studio exec will know it will probably cost more than a logline that implies the movie is a simple comedy that all takes place in a small town. A movie that cost less and attracts al four quadrants is more likely to be sold than one that is expensive and doesn’t have a clear demographic.

The one-two punch of a great logline is a great title. A great title has irony and tells the story in the movie. It isn’t vague, but at the same time it doesn’t hit it on the nose by being too obvious.

Screenwriters are bullheads. Get over it and realize that even if your ideas are clear and great to you, they might not be for everyone else.

Don’t start writing your screenplay until you have a solid logline and title. Yes, it might change once it is bought and produced, but without a solid logline a script will wander and not be easy to write or sell.

If you’re having a hard time writing a great logline for your movie, there is probably something seriously wrong with your story. Make changes to the story so that the logline is more compelling. Better yet (since you weren’t supposed to write until you have your logline) change your logline to be focused, making the characters distinct, the situation ironic, and that will provoke a compelling mental image. THEN write your script with this foundation.

Yes, you’ll have to let go of some of the ideas you originally had for the story. But if those elements don’t build a good logline or story then maybe they weren’t beneficial to the final product.

To test out your logline, pitch it to strangers, perhaps people you bump into on the sidewalk or in a coffee shop. It doesn’t take long, just ask if you can ask them a question, give the logline, and ask their opinion. If it is a good logline, then you’ll get –and keep– this person’s attention. If it is a terrible logline, they will have blank look on their face and they’ll quickly end the conversation.

Testing your logline (and thus your script) this way at this stage will save you a lot of time, effort, and money later on. If you somehow sell a script with a bad logline, it will most likely have to be greatly massaged as it goes through pre-production, production, and post-production. Save everyone involved the headache and fix it at the beginning!

The “Death” of High Concept

You may feel that your script is better by not being high concept, but if you don’t have an audience for it, you will be the only one feeling this way.

High concept is also easier to sell in an international market (which is getting bigger as the years pass) since the audience is getting more diverse. Making a movie’s concept easier to understand makes it more marketable.

Is Film School The Answer?